Amazing sites can be discovered in "Google Earth."  Here are a few examples which show some surprising man made formations in Ireland.  The following images are from County Donegal; the North West area of Ireland.  The first image shows what I believe is a geoglyph of a ancient hunter.  He's wearing a set of antlers on his head; to his left is a large bow for hunting.  This site is near to Legland in County Donegal.

The second site is also in County Donegal; a little further to the east on the same peninsula area.  But right on the shore.  It shows three concentric rings; which perhaps could be an ancient fort.  But what makes the site interesting is a large face just above, and superimposed over the three rings.  Who could this face be?  Perhaps it is a diety from the past.  It is exciting to speculate about this site.  Students of the Atlantis mythology might interpret this as evidence for that ancient continent.  Atlantis capitial city was said to have three concentric walls around it.  The Atlanteans worshipped the god Poseidon.  Perhaps Ireland was one of the Islands of the Kingdom of Atlantis.  The site would be a indicator that Ireland was once ruled by Atlantis.  So we have the face of Poseidon looking over the ringed capital of Atlantis! 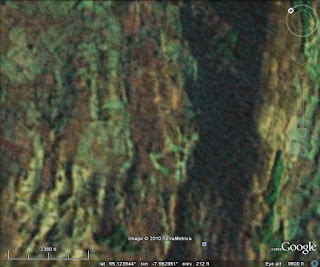 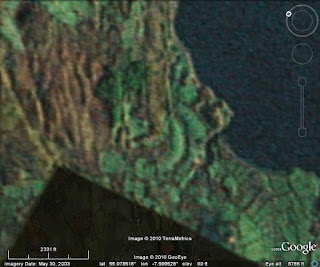 (I recall reading a book about some of these sites in County Donegal.  It was probably from the 1970s or 1980s.  If you know the name of this book; please reply in the comment section.  Thanks!)