The Amherst U.B. bike path is one of the best in Western New York.  The seven mile path is open for walking, running, and bicycling.  It is also open to fishing as well.  The path which runs between North Forest Road and Niagara Falls Boulevard in Amherst, N.Y.; also passes around the State University of New York at Buffalo (U.B.). It is unique in that it parallels Ellicott Creek; and has both open fields and wooded areas.  This combination of the three, has created  abundant animal fauna.  The usual rabbits, squirrels and groundhogs are all present.  There are also large flocks of Canada Geese, Mallard Ducks, and Turkey!  Along the with Great Blue Herons; and Great White Herons in the summer. Above, Red Tailed Hawks scan the fields and creek for small animals.  The woods and fields hide Red Foxes and White Tailed Deer, and others.  There are a multitude of bird species, which vary somewhat by season.  And now there are Beavers!

During the summer months I had a sunset ride, where I encountered the Beaver.  Pedaling along in the evening, I heard a strange crunching sound. Stopping and looking into the creek, there was a animal at the creeks edge, looking back at me.   I thought it might be a muskrat. Since it was dark, it was difficult to see what kind of tail he had.  The beaver obliged me, by swimming around in a short circle.  Coming back to his plant and munching again.  It was like he was showing off to me saying; see I'm a beaver!  So I was determined to get a picture of this fellow.


I spent half a dozen evenings with my camera; trying to get a good picture of the beaver, in the fading light.  Some times he showed up to the same area of the creek;  otherwise he was a no show.  Finally I did get some pictures of fella, though there still not quality images.  He had a habit of swiming upstream past a bridge,  where the plants he likes grow.  I waited near the bridge listening for his splashing. Then running out on the bridge, I snapped a picture before he dove beneath the bridge.  It very difficult to get a picture of them, since they are mostly nocturnal.  I avoided using the flash, as not to scare him away.  The beaver as settled down to making his residence; only a short walk from one of the biggest Universities in New York State.

The beaver made his home in a more secluded area of the creek, away from the bike path.  He started out with a burrow with branches around it, as a temporary home. While he has been busy making a proper beaver lodge.  I found this out by stumbling on it while looking for his lodge one day.  He let out a large Aoouhh, from his burrow.  I made a hasty retreat up the bank it was in!  He has built a clever lodge for himself; it looks like a "lean to" from behind.  Lately he has been scarce; engaged in preparing for the winter.  You can see him darting around under water, in his wide creek expanse.  He is probably gathering mud to seal his lodge; and store branches under water for the long winter.  There is no sign of a dam yet. Though there's always next spring.  Beavers don't always make dams, if the water is deep enough for them.  So I will have to wait and see if he's a good neighbor to U.B., or planning to make a new lake for the university!

I am still trying to get some good clear photos of him; usually he spots me from underwater. He gives me a tail slap, and disappears! 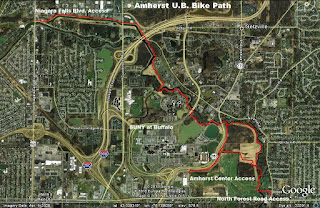