Beaver, Friends ... and the Serpent!

It wouldn’t be my Blog, if I didn’t have a Beaver post!  The beavers are doing very well this spring and summer.  I have observed a few new lodges, mostly near the original large den.  I suspect the offspring of the original pair have taken up residence in the same stretch of  Ellicott  Creek.  They are generally very placid beaver’s and they may approach people that stop to watch them; long as you don’t get too close.  Their foods are the various wild plants growing along the creek; they only take a tree once in a while.  They have to keep their teeth from overgrowing, and they need construction materials.


I have observed some interesting behavior that I had never known beavers could do; they can kill!  I have a photo of one of the Beaver’s carrying a small snake in its jaws.  The snake was creamy colored, with either some pink on it, or some blood leaking along its length as the beaver swam past.  I can only speculate that the snake made its way into the beaver’s lodge, and the beaver killed it to protect itself.  Perhaps it was a poisonous snake?  Of course this would be one of the beavers “friends” or other resident along the creek. There are also some other representatives of the reptile family, snapping turtles, and other species of turtle.

Oftentimes animals may be observed coming to the creek at sunset for an evening drink.  Red foxes are another “friend” of the beaver, living in the woods along the creek.  There are plenty of deer of course, and you may see them come out of the woods at sunset, or at dawn.  Since this is a bike path along the creek in a very urbanized area, there is no hunting.  The animals may often seem somewhat tame, since they're not being hunted.  I once had a coyote trot out of the woods,  and start to run with me as a rode my bicycle!  Maybe he figured he was going to be like the pet dogs people walk with on the path?  A quick clap of the hands sent him on his way.   Of course, you should never approach these animals closely, there still wild animals; even the beaver could give someone a good gash with his teeth.

There are many spots along the Amherst Bike path, where there are large areas of woods.  These exspanses  of woods, are islands in this urban town, each with animal residents.  But, with there matching predators of coyote, fox, predator cats, and snakes.  I hope to have more on these predators in future posts.  Use caution if you explore these woods, and don't let your children wander in them by themselves!  Included is a photo below of a possible predator attack on a beaver!  There are patches of fur missing behind the head, maybe from animal fangs?  Also, notice the torn fur on the left hip; perhaps a predator cats claws?


Now, about one of these predators... the serpent!  There are large serpents, or if you prefer snakes that live, and patrol Ellicott Creek.  I have observed them from a distance, on many occasions over the past few summers.  The sightings last a minute or less, then there gone.  For the first time this year I have obtained two photos from many yards away; as the serpent made its escape.  The size of these serpents are impressive!  The serpent was on the side of the creek, under some overhanging brush.  He swam out from the edge of the creek, I could see his head and eye.  Then he turned and swam down stream, away from me.

Photo #1 shows the serpent in the process of turning away from me and moving down stream.  Photo #2 shows the serpent after he has straightened out, and is now heading down stream, closer to the right bank of the creek.  If you look closely to the left of the serpent head, there appears to be a leaf in the wake flowing around its head.  This gives a range for the size of the back of it's head.  Assume that this leaf is 4" to 6"; then the backside of the head could be 4" to 6" wide.

The two pictures in this post (in order of taking); are of him from behind,  swimming away, while I tried to take the photos. Note: these two photos are 35mm Film photos using Kodak ISO800 film; then scanned in at 600dpi.  The close ups are scanned in at 1200dpi.   I was using Aperture Priority Mode, which lets you set the aperture and the camera automatically chooses a shutter speed.  If I recall correctly, the aperture was 5.6.  I used a 300mm Canon Lens at full extension, with auto focus. 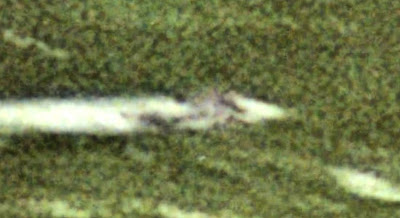 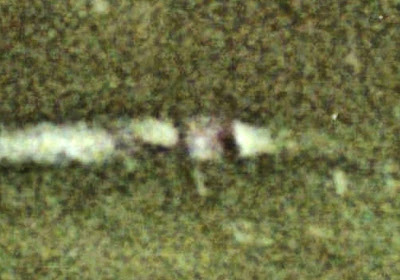 There are many bird species living along the creek and woods, for the interested amateur bird watcher.