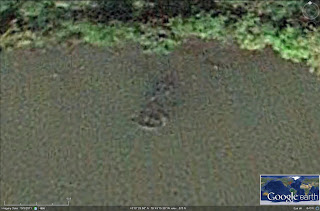 After searching in Ellicott Creek, using “Google Earth” satellite images; I have located an image that shows the serpent!  Looking at it you will say, that’s not a snake or plesiosaur.  Your right, the plesiosaur type dinosaurs made well known by “Nessie” the Loch Ness Monster are not the only type of Lake Monster; even though they are probably the source for many lake monsters.    So let me analyze what’s in this image, so you understand the serpent.  There is a large oval shape, which is in fact the jaw of the head.  The actual head is just barely discernible on the oval, just left of center.

Again you will think this is not the animal in my previous photos.  Beaver, Friends and the ... Serpent!  In fact it is!  I originally saw the serpent in a close encounter in the summer of 2011 (4/28/2011).  After which, I have spent many spare time hours to obtain some photographic proof of this animal.  The mystery of this sneaky serpent is now revealed.  It swims with the top of its head above water, with only the eyes above the surface.  The rest of the head (9’ long and 5’ wide using “Google Earths” measuring tool) is under water.  It head also has sides which slope down to the jaw, which you can just see in the image.  It is not as elegant as a plesiosaur, but it looks aerodynamic.  This may allow it to hunt with stealth, small mammals along the creeks and rivers of the great lakes.  As well as hunting from the creek and lake bottom, fish and turtles.  This is my hypothesis on its hunting methods.
Next notice the six dark spots near the edge of its jaw.  These I observed as well on the serpent I sighted.  They are not merely dark spots, but black pits.  They look similar to the pits on an electric eel! This serpent is much larger than the one I sighted upstream in the creek.  The colors of the head are dark green to black patches, and various tan and brown speckling.  The long thick serpent body looks of similar colors.  Its body would start on the left end of the oval. It is not visible in the picture, and hung down into the water in my encounter.

So here is more evidence for a large unknown  animal living in Ellicott Creek.  Rather, I suspect this is evidence for … the Lake Erie Sea Serpent!