It has been awhile since my last photos of the Ellicott Creek Serpent. I have not done much this past year to obtain new photos, so I put in some effort recently to obtain some new photos. After a number of nights in the dark with my camera, I finally have an interesting photo. It requires some zooming into the photo to see the creature; but it reveals another aspect of this unique serpent.

First some information on how the photo was obtained.  The photo was taken on a moonlit (09/17/2018), but otherwise black night.  The camera is mounted on a tripod, and the focus is set before it gets dark, and then left in manual mode. This prevents the camera from trying to focus in the dark in auto mode.  The lens is a 50mm lens set at its widest aperture (f 1.8) for the maximum amount of light. The ISO or light sensitivity of the camera is set to ISO 25000.  The camera is also set to increase for +2 more stops of light in this digital camera. Then I randomly take a photo every few minutes, for about an hour and a half, and review it on the camera's LCD screen to see if I captured anything.  After a few nights and many photos I caught something.

The first photo shows a shot looking up creek, there is a bend in the creek at the top left.  It passes by on the left of the photo down stream.  There is also branch coming in from the right side as well. 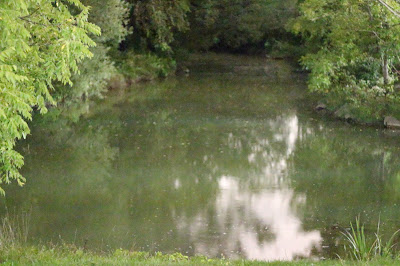 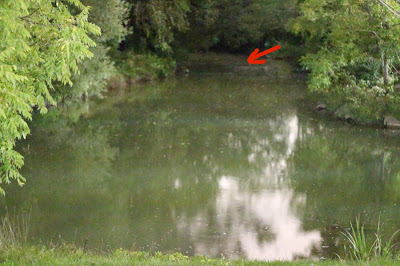 The next photo is a zoomed in and cropped photo, which was then resized to normal size.  Observe near the center, the serpent just barely breaking the surface of the water.  You can make out the top of his head, the brow ridges and  right eye clearly, and some of the left eye. The ridge running down between his eyes is also visible.  Harder to see is some of the edge of his head, and the large outer edge of the jaw.  He is looking down the creek directly at the camera.

Now for the serpent light!  You will observe a faint red light on the outer edge of the head, to the right of the right eye.  This might just be pixelation, or noise in the photo.  But I will suggest to you that is not the case. Many times in the evening while trying to obtain photos of this creature, I have observed light flashes phenomena under the water, or near the surface.  I have taken many photos where this red light also appears, often in shadowy areas that might be the serpent.  Generally this photos were never good enough to use. Recall my previous suggestion in past posts that  these animals may be electric like an electric eel.  I will also now suggest these animals have luminous spots that they use in the dark.  Perhaps to communicate with other serpents, for mating, warning, etc. 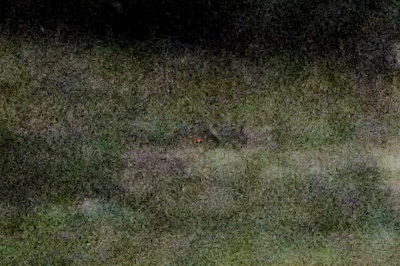 The last photo shows a highlighted serpent, to illustrate what I believe is there. Look at the images and decide for yourself.  Is there a large sea serpent or snake living in Western New York waterways? Is this the Lake Erie Sea Serpent of legend? 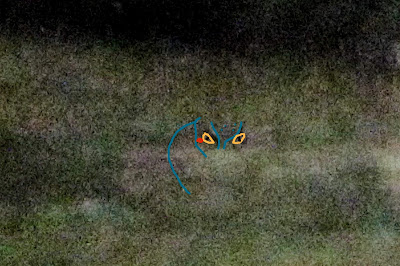