Once again a surprise animal has snuck into a photo taken at a local nature preserve.  I was taking photos of birds at the Reinstein Woods Nature Preserve, here in the suburbs of Buffalo, NY.  You can see the photo below of the pond, with a Mallard Duck in the center.  Unknown to me there was a surprise resting in the shade of the trees in the lower right side. After downloading and looking at the photo on a computer screen, I noticed something looking back at me! At first I thought it might be a Hell Bender Salamander, due to its size. Unfortunately, it doesn't look exactly like one of those. Also, they apparently like clean water creeks as opposed to ponds. 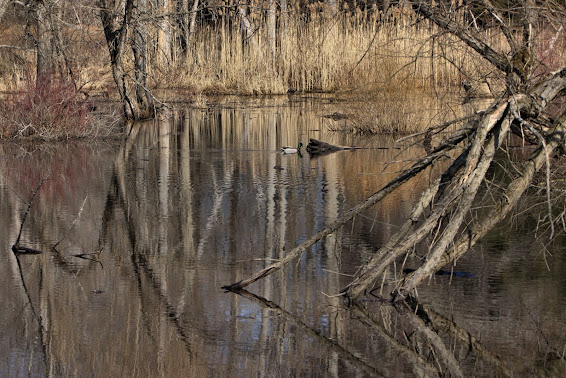 So, I have zoomed in and made an enhanced photo of this interesting mystery animal.  You will clearly see its right eye, and pointed nose. There is a raised ridge for its brow, with lighter coloration to the skin by the eyes. There appears to be a ridge running down the top of its head, behind the brow. You can just see some texture to the dark colored skin on the side of its head. It would be about two to three feet in  length I  estimate.  There may also be a wavy ridge or ridges on its back, or maybe loose folds of skin.

So this animal might be some type of large salamander or reptile.  Maybe its somebodies exotic pet,  they set loose in the pond? Either way it is an unknown animal living among us in WNY ponds!